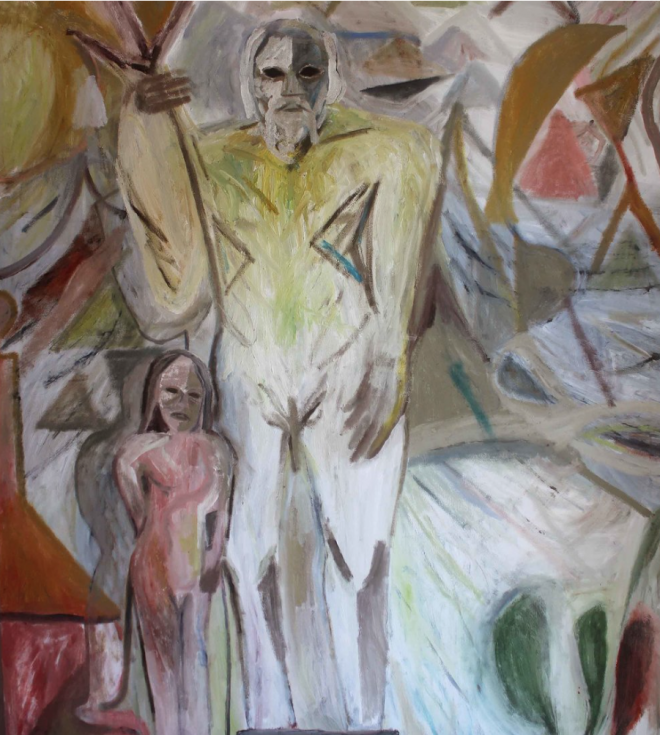 For Justin Williams, Arcana represents an exploration of the self through painterly and sculptural engagements with mythology and folklore. Appearing in this new exhibition are recurrent figures from the artist’s oeuvre, including missing chef Willie Koeppen, and cult-leader Anne Hamilton Burns of the Family. These figures take on new meaning for the artist, as representations of an attempt to understand the self, through explorations of our folkloric pasts.   This exhibition sees Williams engage with large scale painting and ceramic forms, incorporating gold leaf and sand, alongside raw pigment and oil paint, to produce affect in his experimental, and textural works. Presenting like the fall of cards in a tarot deck, Arcana is an embodied attempt at understanding within the tumult of the contemporary, and allows the viewer a chance to divine possible futures for the artist, and themselves.   Williams has held numerous solo exhibitions, including the highly acclaimed Figures & Vessels at ART 3 in New York, in 2016. This exhibition, one of Forbes Magazine’s ‘Must-See’ exhibitions, garnered significant critical attention, with Williams described as ‘Australia’s latest Emerging Talent’. 2015 saw Williams present Stained Mountain at Anna Pappas Gallery, where the artist explored his relationship to place through the mythologies of various figures from local Victorian folklore. Other solo exhibitions include Viridian, 2014, Anna Pappas Gallery, Melbourne; Mountain I Miss You, 2013, Mild Manner, Brisbane; A Touch of Norway, 2012, Lapis Lazuli Pop Up Factory Gallery, Melbourne.   His selected group exhibitions include the  touring exhibition Got It For Cheap, which travelled across Europe from David Risley Gallery, Copenhagen to Steinsland Berliner Gallery, Stockholm and Agnes B’d Gallerie du Jour, Paris, in 2016. Williams was curated into the Anna Pappas Gallery Booth at the Melbourne Art Fair in 2014; Project 14: Free Range, 2014, Anna Pappas Gallery; Trouble in Paradise, 2012, Paradise Hills Gallery, Melbourne; and Group Show, 2012, Scott Livesey Galleries, Melbourne. He has been featured in Artist Profile, ARTSY, Australian Creative and New York Arts Magazine, and was featured as an artist garnering significant global attention in Australian Art Collector’s first issue of 2017.   2017 will also see Anna Pappas Gallery present works by Williams on the global stage at Art Athina Art Fair, Athens, taking place alongside documenta14, which will see a concentrated international art world focus on Athens.