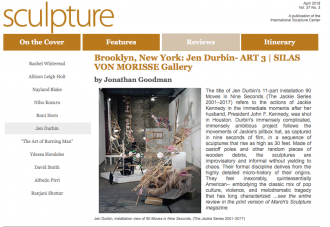 The title of Jen Durbin's 11-part installation 90 Moves in Nine Seconds (The Jackie Series 2001–2017) refers to the actions of Jackie Kennedy in the immediate moments after her husband, President John F. Kennedy, was shot in Houston. Durbin's immensely complicated, immensely ambitious project follows the movements of Jackie's pillbox hat, as captured in nine seconds of film, in a sequence of sculptures that rise as high as 30 feet. Made of castoff poles and other random pieces of wooden debris, the sculptures are improvisatory and informal without yielding to chaos. Their formal discipline derives from the highly detailed micro-history of their origins. They feel inexorably, quintessentially American-- embodying the classic mix of pop culture, violence, and melodramatic tragedy that has long characterized ...see the entire review in the print version of March's Sculpture magazine.