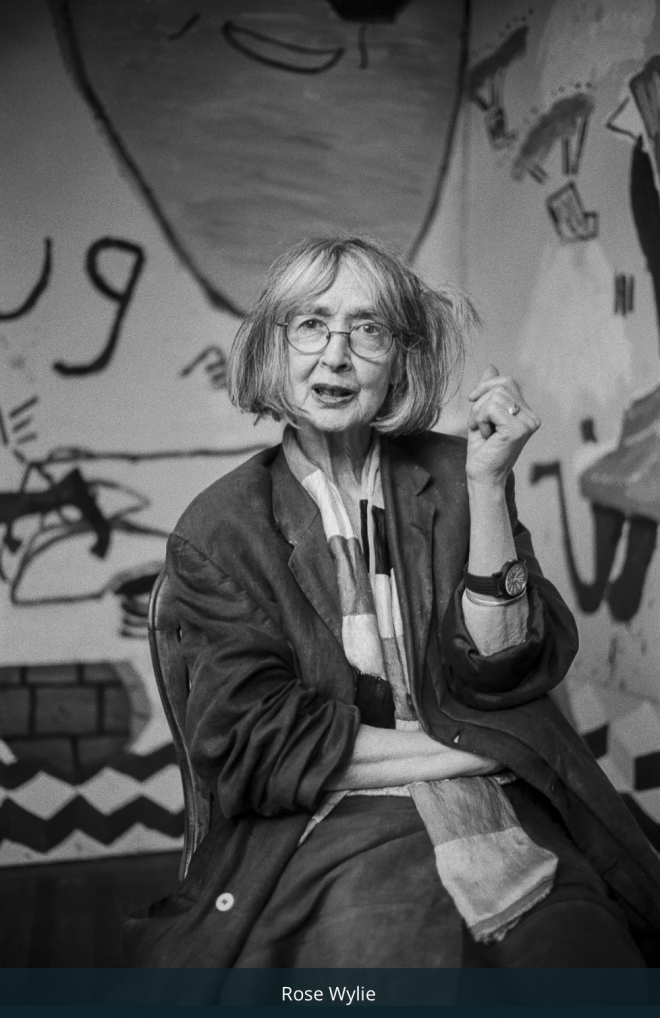 ROSE WYLIE Born in Kent. Graduated from the Royal College of Art with an MA, in 1981. Lives and works in her Kent cottage, producing extremely large paintings on unstretched, unprimed canvas, creating a kind of artlessness. Wylie was one of the seven finalists for the 2009 Threadneedle Prize, and one of the winners of the 2011 Paul Hamlyn Prize for Visual Arts. In 2010 Wylie was the only non-American artist represented in the Women to Watch exhibition at the National Museum of Women in the Arts, Washington DC. In 2012, she had a retrospective at Jerwood Gallery, Hastings, followed in 2013 by an exhibition at Tate Britain, London that featured recent works. In September 2014, she won the John Moores Painting Prize. In February 2015 she became a member of the Royal Academy of Arts (RA Elect). In June of the same year she won the Charles Wollaston Award for "most distinguished work" in the Royal Academy Summer Exhibition.

ROSE & ROY, a documentary by Adolfo Doring, follows celebrated British artists Rose Wylie and Roy Oxlade as they reflect on their past and present. A meditation about love and life and what it means to be an artist in today's world. This film offers a rare glimpse in the creative process of two extraordinary artists who pursued their call against all odds and became England's most unique voices in contemporary painting.