Stitches on Organza, linen and Organza

Meadow Under The Stars, showcases Benini's poetic "narrative embroideries" made of silk threads, organza and pearls. Under her magical thumb, Benini transmits stories of a nature she reveres offering us a glimpse of the mysterious. Benini belongs to those rare and few artists Agnes Martin wrote "...depend upon perception alone".

Those who have the opportunity to see - or touch, if only with their eyes - the works of  Benini find themselves not only in an enchanted world, but in a privileged situation as they witness her whimsical multi-dimensional and mixed medium works. After the first sense of wonder, another kind of wonder emerges, where pure and simple beauty take on a narrative of their own.

"The most beautiful thing we can experience is the mysterious. It is the source of all true art and all Science". - Albert Einstein.

Born in Neuilly-sur-Seine, France in 1965, Benini grew up and studied in Paris and Monaco. After high school, she obtained a degree in graphic design in Florence and BA and MA degrees in literature at the University of Florence, Italy.

Some of her work as illustrator include collaborations with best-selling authors Azar Nafisi, author of "Reading Lolita in Teheran" and Frank McCourt author of "Angela’s Ashes", with the Italian publisher Adelphi. In India, she has published books with the multi-award winning publisher Tara Books (India). The Mexican Department of Education in Mexico selected the Spanish edition of "The Book Book" to be part of their national primary school curriculum for school libraries. Sophie’s books have been published in France, Spain, Italy, Portugal, Israel, Switzerland, India, China and South Korea.

In August 2014,  the book office of the "Institut Français" in India (Embassy of France in India) invited Sophie, “as one of the finest author and illustrator of children’s books”, to appear at the "Jumpstart Festival" held in New Delhi on 25th and 26th of August and Bangalore on 28th of August, 2014.

In her book,  "La legión perdida", (Thule) 2015, she created 19 micro mosaics paper illustrations. In 2016,  she created and conducted a workshop at the Mast Bologna Passage in India by composing a photographic image without camera using an assemblage technique. In 2017, she created and conducted workshops on Persian miniature at the Sackler and Freer Gallery of the Smithsonian Institute in Washington D. C. She re-created a double page manuscript "Adventures" and "Heroes and Villains" from the Persian Book of Kings.

She lives and works in Rome, Italy. 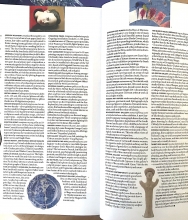