is featured in ARTFORUM BEST OF 2017

Plaster with pigment and wax, clay and wood and metal

Jen Durbin's sculptures and drawings are based on the artist observations on how pictures take up within us. Durbin’s most elaborate project to date, and still in progress, 90 Moves in Nine Seconds (The Jackie Series 2001-2017), is based on the recorded film of the assassination of JFK (The Zapruder film). However, Durbin's unique and extraordinary point of view is solely focused on the movements of Jackie O's pink hat. That unique perspective of that fateful Day is re-created with an uncanny precision as Durbin extracts from the film almost obsessively each and every turn of the hat as it flew over in the air. Each exact pivots of the hat is recorded simply made out of wood or reed showing us the detailed movement of the whirling hat. Durbin’s Jackie Series  is an elaborate and complex sculpture installation comprised of 11 core parts 30 feet high,  with 11 panels of drawings, wood chairs, reed, plaster and wool hats. Strangely poetic and haunting with an eerie feeling, the installation shows us for the first time the feminine perspective of that fateful day.

Durbin received her BFA from The School of the Art Institute of Chicago in 2000, and her MFA from Yale in 2003. Durbin has exhibited in the US and abroad including shows at NEWD Art Fair in Brooklyn, New York, and solo shows with Motus Fort Gallery in Tokyo, Japan and Capsule Gallery in NY, NY. In 2013, she received The Clinton Entrepreneurial Fellowship for her work originating and developing The 1896, Studios & Stages in Brooklyn, NY. 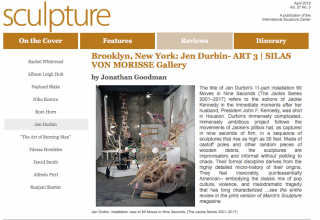 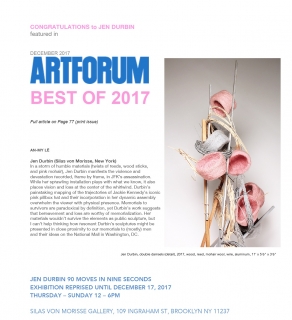 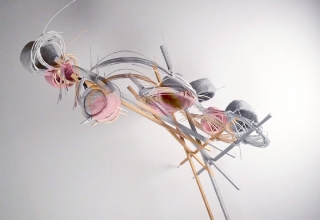 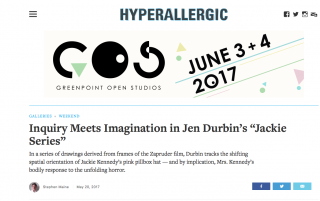 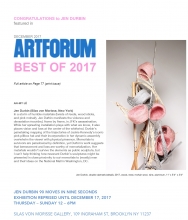 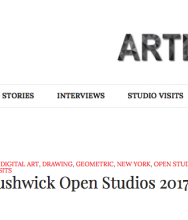 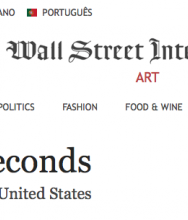 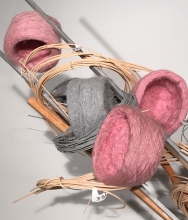